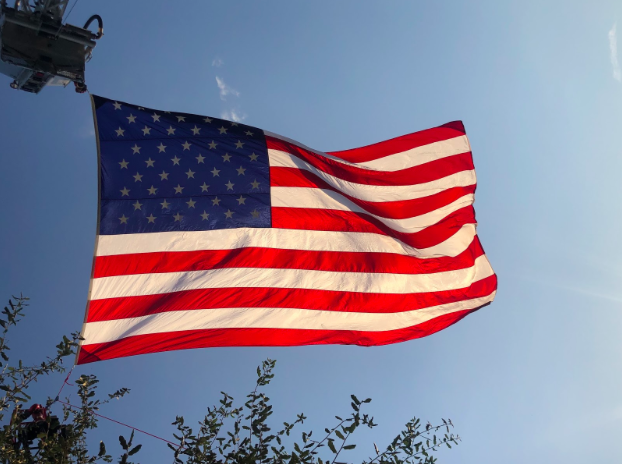 The American flag hung on a firetruck outside of a 9/11 ceremony.

Officer Kevin O’Sullivan, Jupiter High School’s Resource Officer, was a Lieutenant in the New York City Police Department and was assigned to the 20th precinct on Sept. 11, 2001.

During O’Sullivan’s presentation to students at Jupiter High on Sept. 11, he shared his experiences of that tragic day in 2001. He also mentioned how the 9/11 terror attacks was one of two events that Americans remember exactly where they were when the incident occurred.

“If you asked any adult where were you on 9/11 they would tell you right away, and if you have loved ones old enough, where they were when Kennedy was shot, everyone knows that. So, it changed life,” O’Sullivan said.

While presenting to students on 9/11, O’Sullivan admitted he does not look at the audience because he can still visualize his experiences on and following the day. Many of his memories are quite vivid and still painful.

O’Sullivan discussed the “Bucket Brigade” in which he and fellow police officers and firefighters stood in two lines with buckets collecting as much debris as possible in hopes of identifying people who died.

He said he thought about those looking for their loved ones, trying to find out if they were alive or not. He also said he remembers how the construction site billboards had missing people on them as a way to identify people. Earlier this week, he read in the New York Post that they had just identified a 9/11 victim, 18 years later.

O’Sullivan mentioned that the terrorist attack on the World Trade Center is something affecting him to this day. His daughter, a sophomore in college, and his son, a freshman in college, have not heard the extent of what their father went through.

“The conversation I’m having with you today [about 9/11], is one I’ve never had with my kids,” O’Sullivan said.

He did recall one conversation with his son about the events of 9/11.

“I was eating breakfast…and he is eating and says ‘daddy were you there at 9/11?’ and I said, ‘yes,’ and I had to put my head down because I could not look at my son anymore because I got upset. Then, my 12-year-old son got up and gave his dad a hug,” O’Sullivan said.