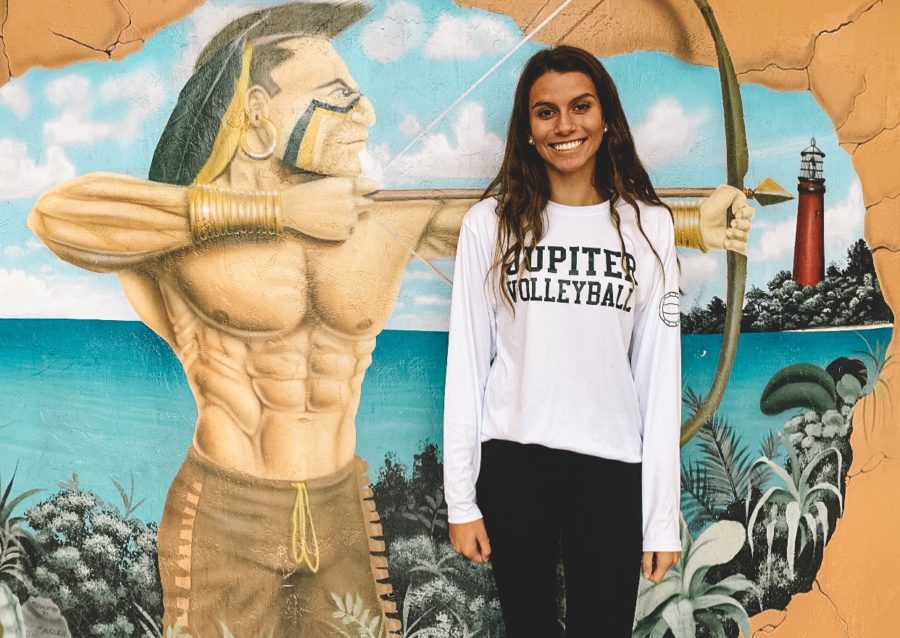 New volleyball player junior Amanda DeWitt represents her new team and poses in front of a mural in the Atrium.

This year saw an influx of transfer students to Jupiter High, and many are playing sports for the school.

“New York had higher and tougher competition, but I definitely like it a lot better here in Fla.,” DeWitt said.

A member of the Warrior football team, senior Marco Wallace was a freshman when he transferred from Jupiter High to Jupiter Christian, but he is back at JHS as a senior. Wallace has been playing football since he was six years old and plans to play in college and beyond.

“I actually experienced more training here than I did at Jupiter Christian,” Wallace said.

Freshman Theodore Endrud joined the boys’ cross country team in July after moving to Jupiter from Minneapolis. He said the sport was more a little more competitive in Minnesota, but the weather in Fla. makes running a challenge.

“The workouts are pretty similar, but it is definitely more humid, and there aren’t as many hills,” Endrud said.

Freshman swimmer, Walker Reid, is from Colorado and has been swimming for 10 years.

“The competition [in Colorado] was definitely not as good,” Reid said.