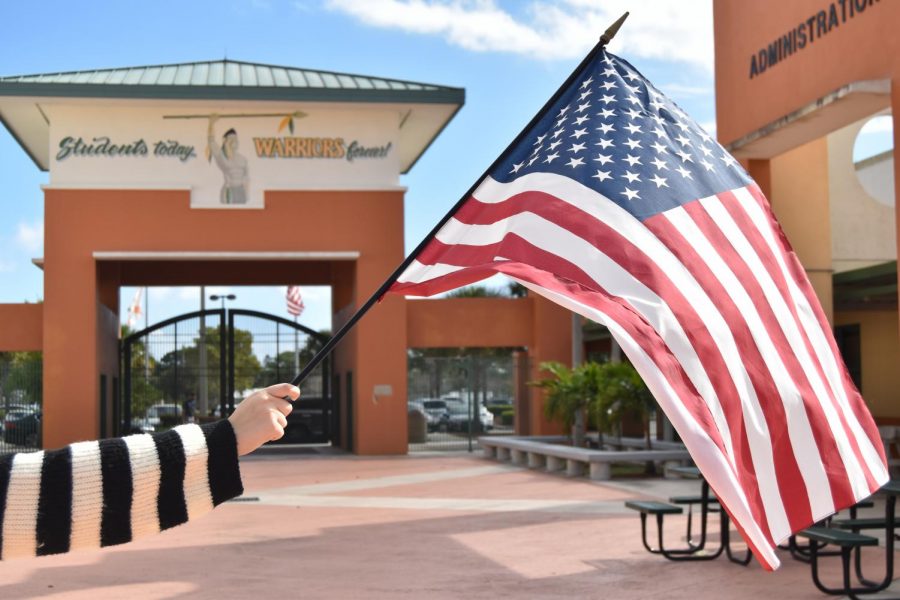 JHS Student waving the American flag at the school's entrance.

With election season quickly approaching, and President’s Day on Feb. 17, it’s important for voters to be aware of what makes a great leader for our nation. Since the ratification of the Declaration of Independence, the U.S. has had 45 Presidents, some of which truly stand out and solidify themselves as the greatest leaders in American history.

An obvious choice for the list, George Washington was the first President of the U.S. and ran unopposed. He was the only candidate to win a Presidential race with 100% of votes in his favor. Washington was also the only President to have a state named after him.

Washington set the precedent of the two-term limit, which was later solidified by the 22nd Amendment, following the death of FDR. Washington also set the standard as to what each President wears while in office, in addition to adding the line “so help me God” during inauguration.

Aside from the important precedents he set and leading Americans to independence during the American Revolution, Washington’s greatest achievement was the establishment of the first U.S. cabinet and executive branch.

Each member of the cabinet held a different position under General Washington during the American Revolution, some of which he even considered family.

Roosevelt became President following the assassination of President William McKinely. At the time, he was youngest President to take office, at 42 years old. Roosevelt was an environmentalist and established our first national park, Yellowstone.

Roosevelt also established the U.S. Navy as the strongest in the world, surpassing Great Britain. The 26th President played an important hand in ending the Russo-Japanese War by forcing the leaders of both countries on a boat until an agreement was made. Roosevelt was awarded the Nobel Peace Prize for his contribution.

After the book “The Jungle” by Upton Sinclair was published, Roosevelt passed the Meat Inspection Act and the Pure Food and Drug Act. Both were made to ensure consumers were not getting sick from contaminated food.

Roosevelt was known for working “for the people.” He passed legislation giving rights to workers around the country with the Workmen’s Compensation Act. Workers no longer had to prove fault to receive compensation.

Lincoln was best known for the Emancipation Proclamation, which freed U.S. slaves following the Civil War. Lincoln also helped enable westward expansion by authorizing the first railroad that ran from the Atlantic to the Pacific Ocean. He is celebrated for many other accomplishments as well, and his face is carved on the side of Mt. Rushmore.

On Lincoln’s final day of his Presidency, he established the Secret Service, originally founded to detect counterfeit money. During this time, every bank had different forms of money, so counterfeiting was ridiculously easy. It wasn’t until after the assassination of JFK that the Secret Service began to protect the U.S. President.

If you enjoy your annual, Nov. feast of turkey and fixings, then you should thank Lincoln because he instituted the first Thanksgiving while President.

FDR was elected following the end of the “roaring 20’s” and the beginning of the Great Depression. Roosevelt came up with what was known as the New Deal to help people suffering from the Depression and to get America back on its feet.

Every year, the March of Dimes has a walk to improve the health of newborns and mothers. Little do people know, FDR started the March of Dimes to aid children with polio and therefore solidified himself as the President featured on the head of the dime.

Roosevelt established a variety of programs and institutions such as the AAA, CCC, PWA, TVA and the FDIC. Roosevelt also championed the Social Security Act in order to open jobs for young people while keeping senior citizens financially stable.

Jefferson was the second President of the U.S. Prior to taking office, he helped write the Declaration of Independence and served as the ambassador to France.

Jefferson won the election of 1800 after being endorsed by his political opponent, Alexander Hamilton. Two years into his Presidency, he established West Point Academy, a prestigious military academy located in NY.

After appointing James Monroe as minister to France and Spain, Jefferson instructed Monroe to make the Louisiana Purchase and furthered the idea of Manifest Destiny and westward expansion.