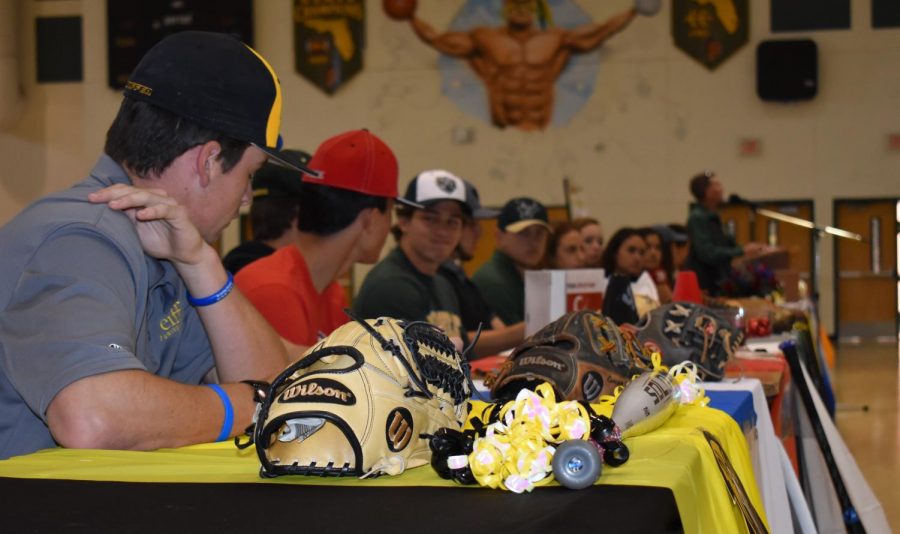 On Feb. 5, 28 Jupiter High senior athletes signed with colleges around the nation to play sports at the collegiate level.

Emily Bodenheimer will be attending the University of West Virginia to play softball. Bodenheimer has played softball for 10 years and said she loves the competition.

“I’m so grateful I get to be part of a great team, and I’m looking forward to making the team even better than it already is,” Bodenheimer said.

“I’m excited to see what the future holds and how I can improve and lead others,” Coffey said.

Soccer player Maddie Brown has been playing the sport she loves since she was four years old. She signed with Middle Tennessee State University to play soccer in the fall. Brown is looking forward to being in an environment where she can grow both as a student and as a player.

“It’s taught me so many lessons and has definitely shaped me into the person I am today and I couldn’t be more grateful to have been given the opportunity to continue soccer into my college years,” Brown said.

Tusculum University signed volleyball player Jensen Capo. Capo has been playing volleyball since she was 11 years old, and she appreciates all the sport has given her. Capo is excited about starting her college volleyball career.

“Honestly I think it kept me on a good path throughout high school. Being a part of something good and wholesome was a great experience and brought a lot of good people into my life,” Capo said.

“I want to do track throughout college, and, hopefully, I get to take it even further,” Miller said.

Miller knew she wanted to be a college athlete but never knew it would be track that would get her there. She couldn’t be happier with her decision.

Golf state champion Izzy Galla has been playing the sport for five years and loves what golf has given her. Galla signed with Merrimack College in Massachusetts.

“Golf is an individual sport, and you have to rely on yourself to succeed, and that means everything to me because I put in a lot of hard hours trying to be my best,” Galla said.

She’s looking forward to becoming a better player in college and getting to work with her new coach, Jason Malcolm, and her sister Alle Galla, who also signed with Merrimack College.

The University of Central Florida signed cross-country runner Ali Del Re. Del Re has been doing track and cross country since middle school, and she has many wins under her belt.

“I’m looking forward to everything. I’m excited for the college experience and to get to know new people who also have a passion for the sport like I do,” Del Re said.

Basketball player Josh Glesil has been playing the sport for seven years. Glesil loves being part of a team and working with his teammates, so he’s excite to take his skills to the next level at Warner University.

“Being able to go to college and play a sport you love is an amazing thing, and I’m so grateful I was given the chance,” Glesil said.

Tyler Benedetto is a state champion lacrosse player and last week signed with Jacksonville University. Benedetto likes the physicality and work that goes into the sport and has played since seventh grade.

“I was really happy when I found out I was signing with my school because I not only am being given the opportunity to play a sport I love but I’m also going to get to major in cybersecurity,” Benedetto said.

Benedetto joins other state champions, Kurt Pelchen, Miles Jones and Devon Rasmus, who all signed to play lacrosse in college on Feb. 5.

Baseball state champion Scott Hartigan has played the sport since he was five years old and is excited about his chance to play at Palm Beach State College.

“It’s a game of successes and failures, and that’s what I love about it. It teaches you to be resilient and persistent,” Hartigan said.