One World: Together At Home concert raises millions 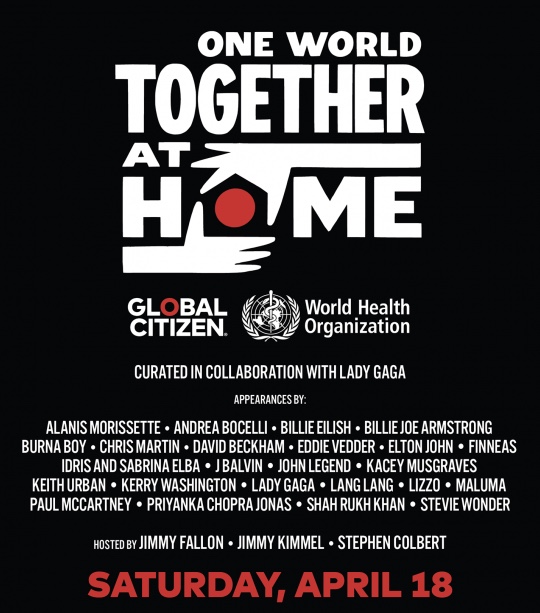 Millions of viewers tuned in to watch the Global Citizen One World: Together At Home concert on April 18 to raise money for workers on the frontlines of the COVID-19 pandemic. The concert was hosted by Jimmy Fallon, Jimmy Kimmel and Stephen Colbert and was broadcast at 8 p.m. on ABC, FOX, NBC, CBS, CW and Freeform.

Jupiter High student Jason Dobuler watched the concert from start to finish and enjoyed seeing the wide array of artists.

“My favorite performances were either Elton John, Stevie Wonder or Lady Gaga. I haven’t really listened to much of Lady Gaga, not that Bad Romance isn’t stuck in my head a lot for no apparent reason, but her cover of Smile by Nat King Cole was great and unique,” Dobuler said.

Some of the artists even did covers of iconic songs and one in particular stood out to Dobuler.

“John Legend singing Stand By Me by Ben E. King, really amazed me and it was done really well. What can I say I just love John Legend,” Dobuler said.

We are now living in a time where we all might have to get used to watching concerts or special events from home. The internet has become a big part of our lives and who knows if we will have more virtual events like this in the future, even without a pandemic.

“I think it would be nice to have more things like this but it takes something major to have that many famous musicians perform together, even virtually,” Dobuler said.

Another Jupiter High student also enjoyed the concert, freshman Diana Gordish. She was happy to have something to pass the time while in quarantine.

“I thought that it was a good way for the big influencers to enlighten the world and entertain during this boring time,” Gordish said.

Zach Thomas, Jupiter High freshman, was reminded of the reality that no one is alone and of how everyone is going through the same thing.

“I’m not one that looks up to celebrities and influencers for their advice or opinions, but it was nice to see them and know we’re all in this together,” Thomas said.

Thomas felt comforted knowing that the whole world was brought together with music.

“I liked the feeling of togetherness, It was almost relieving to see musicians and other influencers who are in the same situation that we are,” Thomas said.

Global Citizen raised over $127 million for frontline workers from the concert.