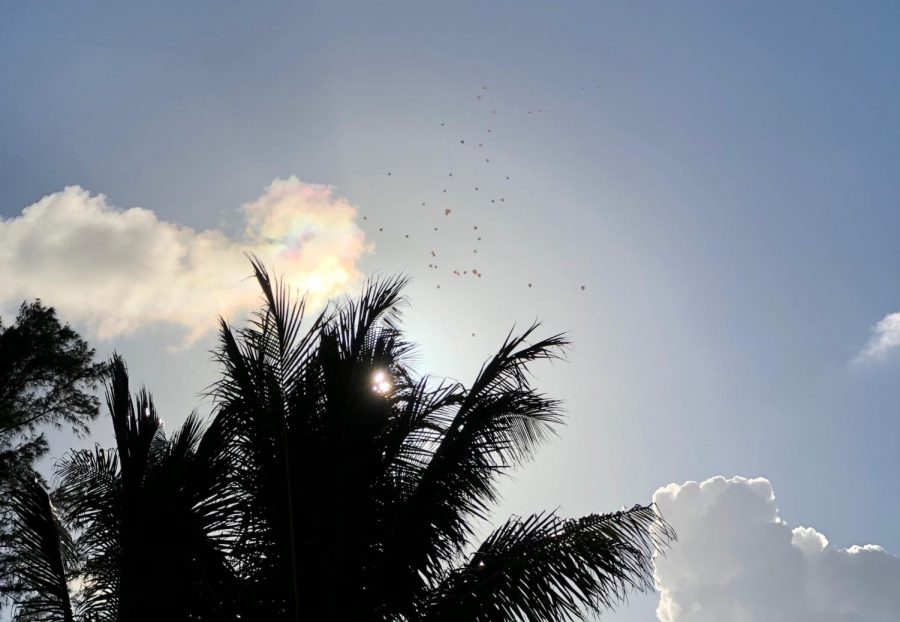 On a clear afternoon, with just a pop of clouds in the sky, Jupiter High students, along with friends and family of Simon Baker, gathered at the Jupiter Inlet to remember one of their own, who died by suicide on Aug. 26, 2019. The group of over 50, including Baker’s teammates from Jupiter High’s JV and varsity baseball teams, remembered Baker by sharing memories, comforting each other, then by signing white biodegradable balloons before setting them free. The balloons drifted toward the setting sun as onlookers said goodbye once again to a beloved member of the community.

One of Baker’s closest friends, Katelyn Hiebert, a Jupiter High senior, attended the Aug. 26 event at the Jupiter Inlet.

“I believe that it was important to go to the ceremony in honor of Simon because the last thing that any parent would want would be to have their child be forgotten,” Hiebert said. “I am very close with his family, so I was there for moral support, but for everyone else I think that they just want to remember their friend. Everyone there wanted to show his family that he would never be forgotten.”

“One thing I would want everyone to remember about him would be how he could light up a room and make everyone smile. If no one was talking and just on their phones, the moment he would walk in everyone would be speaking and having fun,” Hiebert said. “I think he just brought everyone together in ways that no one realized.”

Baker’s teammates also remembered his bright smile and willingness to help whomever needed it.

“He was always smiling when he was on the field…I just liked how we were able to show others how to work hard, but you can still have fun while you are doing it,” friend and teammate Jackson Wodraska, a Jupiter High senior, said. “His passing has affected me greatly…I have known him for so long, and I have always considered him to be a good friend and someone I could always rely on or trust…I know how much his passing affected the baseball community…It makes us much more aware of the situation going on, and some great things have come out of it such as fundraisers to help people with depression. There has also been a scholarship for athletes created in his honor by his parents.”

Like Wodraska, friend and teammate Christopher Sorge remembered how Baker was a force on and off the baseball field.

“My favorite memory with Simon is every memory because every memory I have with him is so unique in its own way…I cherish the ones that we made on and off the baseball field,” Sorge, a Jupiter High junior, said. “Simon’s passing has affected the community and me very deeply. All people feel the same that I feel, and that is always wanting him back. It’s affected me because now every time I see someone else wearing the number 10, it always makes me think of him. And it’s affected our whole team because we know we all have to work with what we have and to always remember that he’s still with us.”

Baker not only impacted his teammates but also his coaches.

“[I remember,] during the final out against Dwyer to advance to the County JV Championship game, Simon was yelling ‘Let’s go!’ and leading the charge with the entire team,” Pete Ceppo, Jupiter High’s JV baseball coach, said.

“Seeing my 13-year-old son writing SB10 [Simon Baker #10] on his cleats and watching him play with them was special. My son and Simon barely knew each other; however, Simon helped by working a fundraiser to send my son’s travel team to Myrtle Beach,” Ceppo said. “Simon and his family were very helpful and gave to JTAA Baseball. The awareness of Simon’s unfortunate passing and the authenticity of personal struggles are what touches me the most. Each player at JHS that played with Simon echoes the same great recurring sentence, ‘What a great teammate.’”

The impact of Baker’s death led groups like Jupiter High’s Student ACES to establish the Simon Baker Scholarship that awarded two Jupiter High seniors last school year. ACES also created a mental health portion for their program, to raise awareness about how to identify and help those suffering from depression, anxiety and other mental illnesses. The program consists of multiple lessons where students are taught how to react to people reaching out for help, how to handle it themselves and how to help those in need.

The Edna W. Runner Tutorial Center will feature a living garden dedicated to Baker named Simon’s Giving Garden where visitors can go for a quiet space, to take stock and find peace. It will include pollinator plants for butterflies and areas where students can reflect and grow. To help support the garden, visit https://www.ewrunnerctr.org/p/31/simon-s-giving-garden#.X2vlZZNKit8.

If you are suffering from depression and suicidal thoughts, or know someone who is, call the suicide prevention hotline at 1-800-273-8255, text 741741 or visit https://suicidepreventionlifeline.org/.