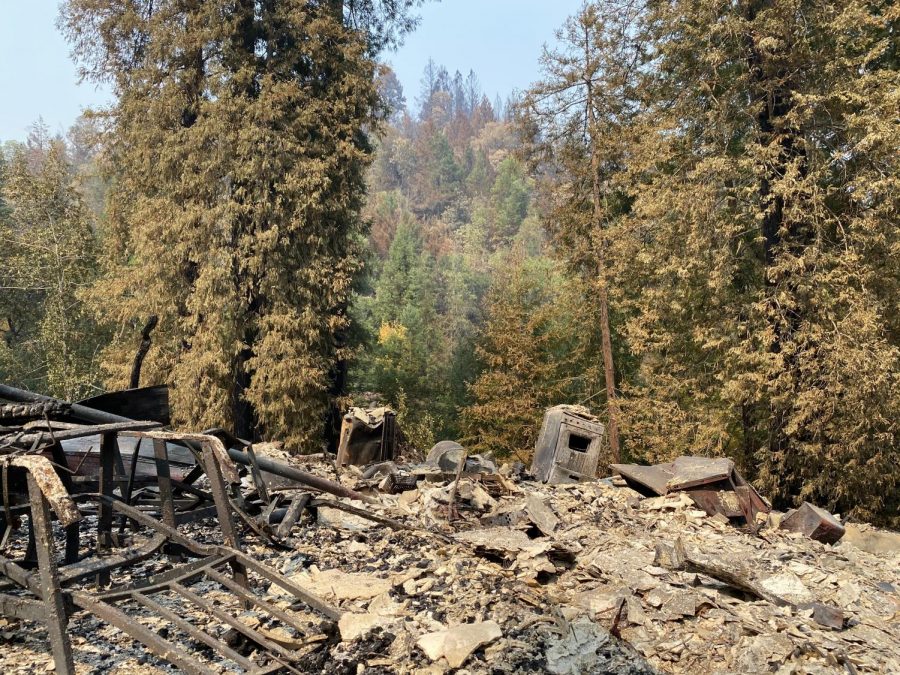 The wreckage of Calif.’s most destructive wildfires leaves a Healdsburg family shocked and devastated.

Calif. has had a long history of disastrous wildfires, yet this season has been categorized as the worst ever. So far, over 3.2 million acres have burned.

The state’s peak wildfire season typically runs from May through Oct., but wildfires can occur at any time. The dry, windy, hot weather exacerbates the fires, making it tough for firefighters to extinguish the flames.

Lightning caused the first fire of the season on Sept. 8 in Healdsburg, a small tourist town in the state’s wine country, located about 15 minutes from the Lazy G Family Ranch and Vineyard, one of many places that were destroyed by the fire.

“Originally, [the Lazy G Family Ranch and Vineyard] was my grandparents’ property,” Susan Hawkinson said. “The whole family would go to the ranch every summer; it was an awesome vacation spot.”

Hawkinson was born and raised in Calif. and called the ranch her home.

“This property has always been a part of our lives; the fact that it burned down was absolutely heartbreaking for the whole family,” she said.

The Hawkinsons were planning on spending more time at the ranch before everything burned.

“It seems so surreal that your ranch can be bombarded with fire and just be gone like that,” Hawkinson said. “Especially since fire has never gone through our property before.”

The Lazy G Family Ranch and Vineyard had been in the family for roughly 70 years. Most structures were at least 80 years old.

“It’s hard for people to imagine how fast these fires can move,” Hawkinson said. “Last year, it was reported that a fire traveled 100 yards within just three seconds.”

“The fires here spread so fast that people barely have enough time to grab their most needed belongings when placed under evacuation orders,” Casey Hawkinson said.

Casey Hawkinson, a Calif. resident since 2015, also explained how terrible the air quality gets when fires are raging across the area.

“It pretty much looked like Mars here,” he said.

The orange-tinted skies come with thick, unbreathable air that sometimes requires the use of a mask.

“To prepare for next seasons’ fires, we are looking to rebuild with more fire prevention,” he said. “We have to be smart about where to build and what to build with.”

Florida’s tropical climate is at times the opposite of Calif.’s dryness, but our hurricanes are, in some aspects, quite similar to their wildfires.

“They both come at you changing directions and strengths,”one of the owners of the ranch, Don Hawkinson, said . “In the event of a hurricane or a wildfire, there isn’t much you can do but evacuate and hope for the best.”