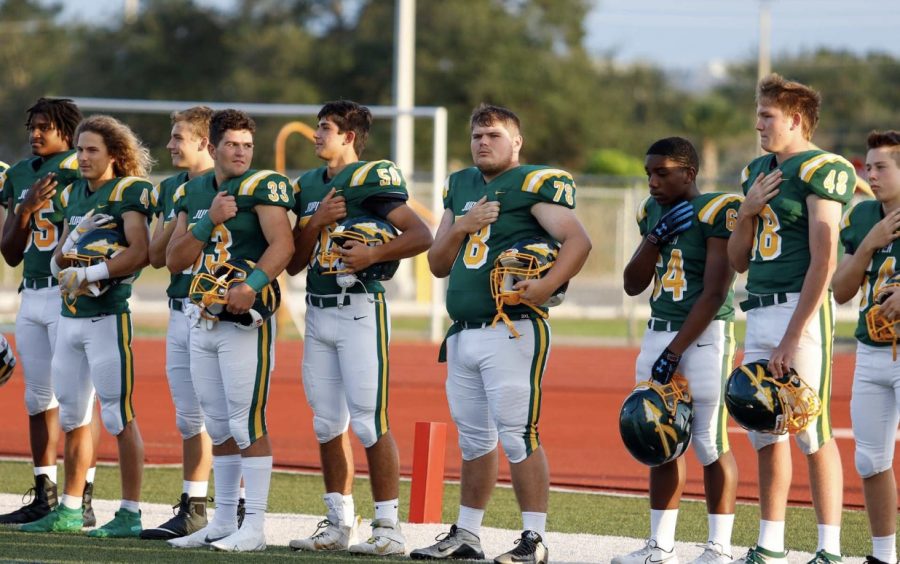 For the first time in 21 years, Jupiter High defeats one of their biggest rivals, Palm Beach Gardens, with a final score of 35-28 on Nov. 13.

With an undefeated record of 4-0, the Warriors are thriving this year. Though COVID-19 delayed the start of the season and sidelined several practices, the players and coaches worked to improve on a winning 2019 season to soar to an undefeated record against tough competition, most notably Gardens.

After their victory against the Gators, the Warriors were ecstatic.

“Our players were beside themselves. I don’t think necessarily that they weren’t expecting to do it because I think we were confident that we could beat them but when it actually finally happened the excitement level was tremendous,” Timothy Tharp, the head football coach, said.

With COVID-19 restrictions, the football season was certainly unconventional, so the win against Gardens felt good.

“It was a sense of relief because we’ve been putting in so much work for our season to be going well, especially with COVID and everything slowing everything down. So to be able to beat a team that you have not beaten in so long, it really feels good,” William Bates, the starting quarterback, said.

Before the Gardens game, Jupiter’s coaches were eager to get out on the field and defeat a team that has historically been successful against the Warriors. The two teams have a unique relationship, in that several Jupiter coaches also coached at Gardens at some point.

“We did it for the coaches because we knew they really wanted to win that game,” Emonte Brown, the running back, said.

Brown scored two touchdowns for Jupiter to put the Warriors on top. He credits much of the success of the team to Tharp, who has been good for the Warriors both on and off the field.

“We were talking after the game and it was like a heavyweight championship fight. I mean the momentum shifts were very, very big, and probably as much as anything, just the resiliency of our kids to continue to play hard and fight through adversity and battle through those types of things and come out on top was, it was huge,” Tharp said.

Bates thinks the difference between this year’s team and last year’s is the “work ethic from all the players.” He also said “it’s probably the hardest working group of boys we have had. Every guy knows that even if what you’re doing doesn’t affect your stats, or what happens to you, it’s helping and affecting the entire team.”

The senior Warriors were overcome with emotion because they have been waiting for this win for four years.

“I mean [winning] was great, but it was probably better for the seniors if I’m being honest because the seniors have gone for years without beating them,” Ryan Preisendorf, junior offensive tackle, said.

With a lead of 28-14 at the half, the Warriors were determined to keep scoring to solidify their lead.

“After every touchdown we scored it was just an excitement, just kind of more motivation to keep scoring and just keep putting up points,” Cristian Orth, senior tight end, said.