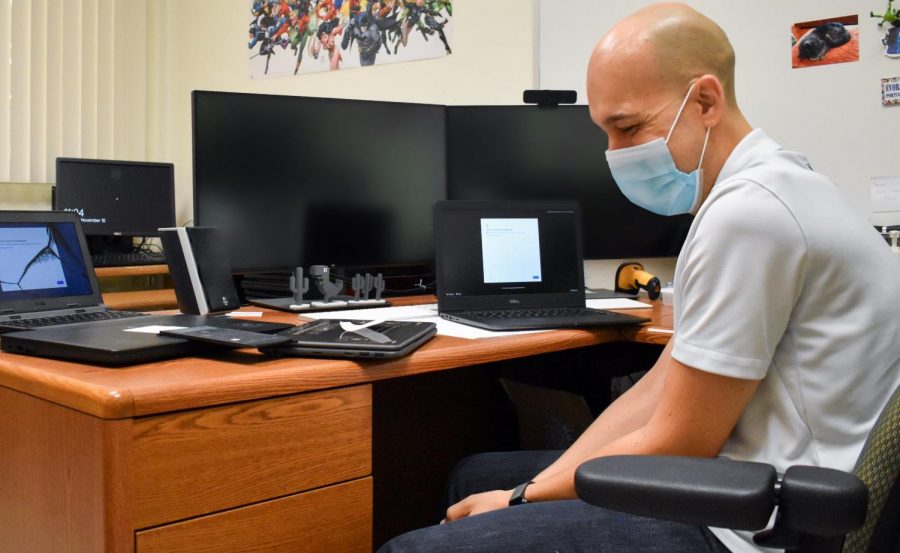 Michael Gunn enjoys a laugh in his office while surrounded by multiple computers.

Before the start of virtual learning, Michael Gunn, Jupiter High’s school tech, worked extremely hard to give students and staff the best learning experience with the help of technology. Now, with online learning a necessity, Gunn’s role on campus is indispensable. He is the unsung hero of Jupiter High, and his work ethic, kindness and skills are unmatched.

Gunn originally began working at the school in 2011 on the custodial staff, but with his love of technology, he took on the role of school tech and has never looked back.

“I started here in 2011 as a custodian, and I took a couple of classes to learn more about computers,” Gunn said. “I actually had an interest in computers since I was a little kid, so I got certifications and got the job.”

From a young age, Gunn has appreciated technology. He said it was a way for him to bond with his dad, and he realized technology was something that will keep enhancing our lives.

“When he was home, we would like to tinker with technology, and it was always around the house. I knew particularly this exact work was something I wanted to do,” Gunn said. “It’s different every single day, which keeps it entertaining.”

Looking back at his younger self, Gunn said he was anxious about what his future would look like, but he always reminded himself to take it slow and to encourage others to do the same.

“If you had asked [younger] me what I would be doing today, I would have no idea,” Gunn said. “So, to my younger self, I would say to follow what you want to do, which is what got me here. Take it one step at a time and relax. Don’t worry about it so much.”

Gunn grew up in New Jersey but moved to Fla. in 2008, and he was instantly drawn in by Fla.’s paradise.

“My family started flying down here, and I would visit and wonder what I was still doing in New Jersey,” Gunn said. “You can’t beat the weather. It’s an entirely different vibe.”

Aside from technology, another interest of Gunn’s is cooking, which he got his love for from growing up in an Italian household.

“I come from a big Italian family with way too much food, enough to feed fifty people when you’re only feeding twenty,” Gunn said. “I like to spend a good night to just cook for my friends, so I like hosting and cooking.”

Gunn is inspired every day by his coworkers and friends and their dedication to their jobs as educators, administrators and staff.

“Seeing the way that they care about their jobs and helping students inspires me to help students,” Gunn said. “The people I work with are my favorite thing about Jupiter, like Ms. Potts, Ms. Foss and Ms. Miller. It’s a huge school. There is one of me and so many students and teachers. They always help me out in any way they can.”

Gunn added he is immensely thankful for the help he receives from his colleagues and peers.

Assistant Principal Kelly Foss has been working with Gunn for eight years and admires his capability to set his mind and get something done and do it so skillfully.

“He first started working here as a part of the custodial staff, but applied for school tech and got the job,” Foss said. “He proved himself right away. He’s a hard worker, and his temperament is always even-keel.”

Foss explained when there’s a problem with her computer or any other teacher’s device, Gunn immediately helps his coworkers to keep a steady working environment.

“He will go student by student, room by room, to answer everyone’s needs and try to get to everyone’s assistance,” Foss said. “Especially at the beginning of the school year, it was really challenging for a good portion of our staff, and he was constantly being called to rooms. He would go in and respond to them by asking how he could help and what he could do.”

Foss is appreciative of Gunn’s calming manner and willingness to help. She said he is always aiming to create a stress-free environment.

“When he walks into a situation, I think he brings that calm when people are in panic, which is what is needed,” Foss said.