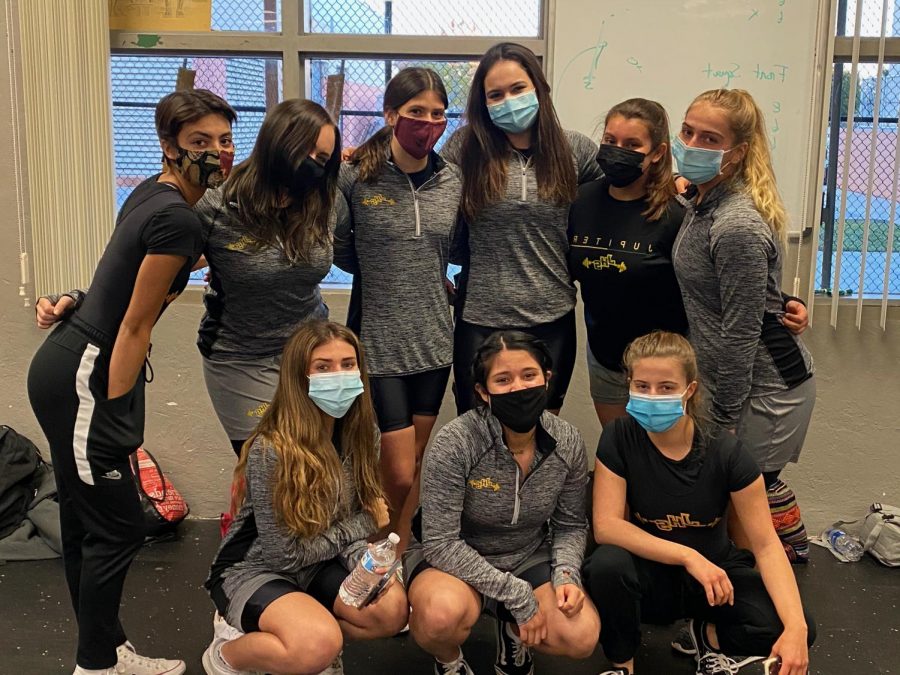 Jupiter High's girls weightlifting team poses for a picture after a successful meet in the school's weightroom.

Girls weightlifting ended their season strong despite a few challenges because of COVID-19. They had their regional tournament on Jan. 31 after placing third at districts on Jan. 23 at Seminole Ridge.

Eyeing the post-season, the team trained nearly every day to get to regionals, and they held extra practices on “off” days to prepare.

With a smaller team and a shortened season, the team focused more on personal gains, with each girl setting higher goals, than on the big match wins.

“My favorite part of weightlifting is definitely the meets we have with other schools,” Simpson said. “Everyone is so supportive of each other no matter what team you are on. It is an amazing atmosphere that is created when we are all cheering each other on, pushing each other to do better next time.”

During training, athletes have a healthy environment based on encouragement from their teammates and coaches alike.

“I personally love training, I always feel so much better after it,” Simpson said.

Simpson has been on the team for two years and recognizes the necessary changes.

“We have only lost one meet, but this year is strange, we went from 60 girls to six,” Simpson said.

The decrease in athletes has forced the girls to work harder to meet the level of competition and they have done so, with only only one loss to Dwyer High School.

“We have a lot less girls, so competing has been harder,” Ava Cyr, sophomore weightlifter, said.

Although it’s been difficult, the team has competed against and beat Dwyer, Royal Palm and Palm Beach Gardens before winning fourth place at conference and third at districts.

“We work hard, and it has been tough, but we have become such a little family,” Mansfield said.

Parents and friends are not allowed to attend meets this year because of safety precautions and the need for social distancing. Instead, the girls cheer each other on during practices and meets for motivation to improve, and they focused on training to be a bit better each day.

“Training is just trying to be a little better than you were last week,” Grace Lavallee, sophomore weightlifter, said.

As with all sports, COVID-19 has impacted girls’ weightlifting this year, but the team persevered, despite the setbacks.

“I have been doing okay this season, but definitely feel a little off just due to this not being a normal season,” Gabriella Mansfield, sophomore weightlifter, said.