Jupiter High has historic past 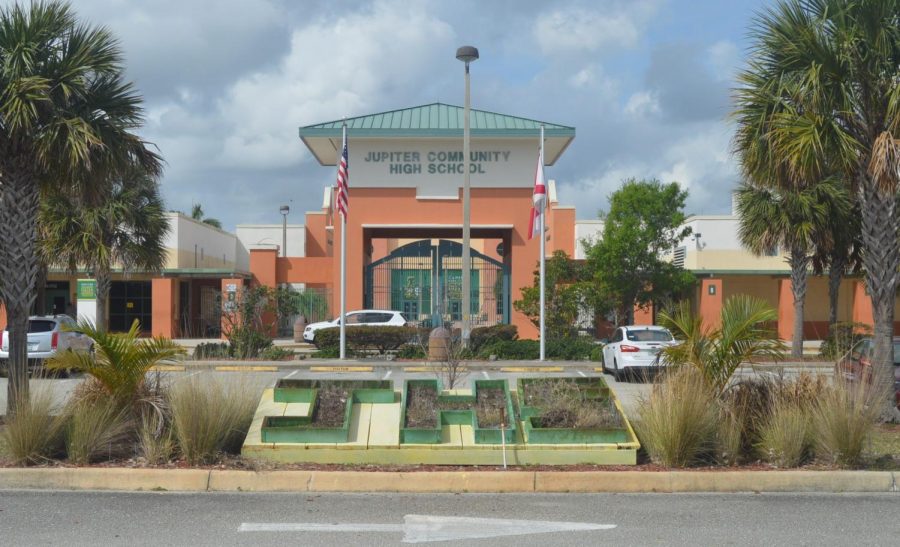 Jupiter Community High School has a long and detailed history that dates back to the 1930s.

The area now known as Jupiter was settled in the late 1800s and was incorporated as a town in 1925. In the five years that followed, developers built Jupiter School that was both a lower and a secondary school. In 1967, a separate school was built for junior and high school students on Military Trail then Jupiter Middle School was built in 1983 for grades six to eight.

Joe Lang, a JHS assistant principal, attended and worked at Jupiter High when there were two campuses. He described how different the day was because of the size of the school.

“There were 10 minutes in between classes because sometimes you needed to go from a class in the south campus to a classroom in the north campus,” Lang said.

Michael DeLeonardo, while not an alumnus, has been a teacher at JHS for 26 years and has witnessed the school’s recent history, including integrating the two campuses into one.

The groundbreaking for the new school took place in 2001, and students started using the new, unified campus on Aug. 13, 2003. The total cost to build the new school was $56 million.

As a testament to the rich history of Jupiter High, Lang’s father, Ron Lang, attended the school from sixth to twelfth grade. After graduation, Lang’s father came back to Jupiter High to coach and teach for 30 years, and Lang followed in his path.

“Upon his retirement, I followed in his footsteps and took his job, and I have never looked back. JHS is a family, and I will never work anywhere else,” Lang said.

Kristen Heard, a math and personal finance teacher, attended JHS from 1988 to 1992. Heard fondly remembers her time as a Jupiter student and is still very close to her former classmates; she even teaches some of their children now.

“High school was the best. There was a lot less pressure back then, and we had a lot of fun,” Heard said. “We had a great deal of pride in being a Warrior. I still do.”

Before the new high school was built, faculty and staff participated in spirit activities beyond the traditional homecoming week, including “faculty follies,” a staff talent show for the students to enjoy.

“’Faculty follies were an exciting time. It also served as a fundraiser. Students paid $1 to get out of class and attend,” Lang said. “It was a time when students could watch their teachers let loose and be goofy; some actually had talent.”

Jill Plummer, an AICE English teacher, graduated from JHS in 1972. She takes great pride in being a Warrior and was even crowned the school’s Homecoming Queen. As a high school student, Plummer was involved in various extracurricular activities that are still available for students today.

“I was not involved in sports because there were limited teams,” Plummer said. “Instead of sports, I participated in Spanish Club, Student Government Association and Homecoming.”

One of the biggest schools in the county, Jupiter High is known for its strong academics, with one of the largest AICE programs in the area, and for its extracurriculars. Heard understands the benefits of working at a large school with an academic focus and feels her years as a Jupiter High student helped her to become a better teacher, leading her students on the right track.

“Your ethical and moral compass come from who you are as a student. Teachers are here to educate you, but they also want to teach you to be good employees or bosses someday,” Heard said. “We have all made our own mistakes, and we use those mistakes to help you.”

As the town of Jupiter grows, Jupiter High faces overcrowding. To help with this issue, new portables were brought on campus in June 2020, allowing for much-needed classrooms for an ever-growing student body. The portable additions were completed in early 2021, and now the school has 46 additional classrooms beyond the main buildings.