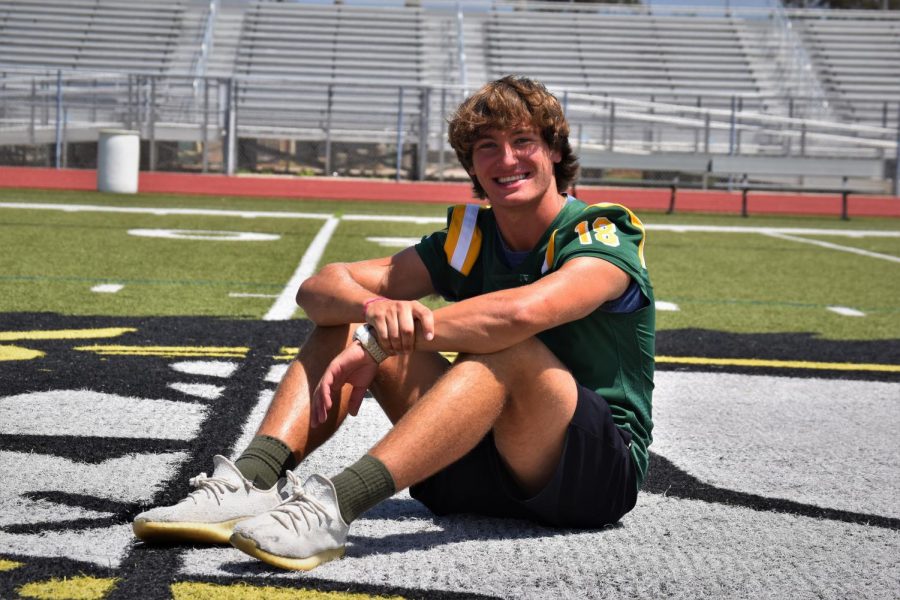 William Bates lines up behind his center. Bates clutches the football and barrels head first into the defense, with the support of his offensive line. This play adds yet another six points for the home team’s score. With an extra point, the Warriors increase their lead. The clock hits zero and Jupiter High’s varsity football team wins their season opener against Okeechobee High School with a final score of 37-6. Billy Bates celebrates with his teammates; a phenomenal start to his final high school season.

Bates, a senior, is the team’s starting quarterback and has been since his junior year. Bates’ interest in football started at a young age.

“It was my father in the very beginning who convinced me to play,” Bates said. “And I just loved it ever since.”

Bates has played football for 12 years and has always been a leader on and off the football field.

“He knows how to talk to people and get them in the right direction,” Jack Pagan, senior and teammate, said.

Pagan has played with Bates since his sophomore year.

Along with his athletic ability, Bates also excels in the classroom. He is currently enrolled in three AP classes, one AICE class and one honors class. Bates keeps a simple mentality to keep his grades up.

“It’s not necessarily a matter of difficulty. It’s just a matter of consciousness and remembering to stay on top of stuff,” Bates said.

His teammates also take note of his academic ability.

Beniot, who has played with Bates since freshman year, sees Billy as an inspiration.

Bates’ younger brother, Joey Bates plays football as an offensive guard blocking for his older brother. Joey looks up to Bates and is glad that he gets to help his brother on the field.

“For the first time in my life, I’m protecting him instead of him protecting me,” Joey Bates said.

“I think it’s really important that we have high character and high integrity people in the football program,” Tharp said. “I think Billy epitomizes the type of players and student athletes that we want associated with football.”

Tharp credits some of the football teams improving success to Bates, and mentions Bates’ off-season work.

“The amount of work he puts in during the off-season was tremendous, and I think that earned the respect of his teammates,” Tharp said.

Bates’ off-season work has paid off and has definitely gained him the respect of his teammates.

“He’s a freak of an athlete,” Beniot said.

Bates is not only a great student athlete, but also a former eagle scout. He participates in track in the spring for Jupiter High and has placed high with his javelin throwing. He plans to go to Florida State University for his academics.

“I think we’re a better football program because of guys like Billy Bates being in it,” Tharp said. “And as long as we can continue to get those types of players as part of our team, we are going to continue having success.”