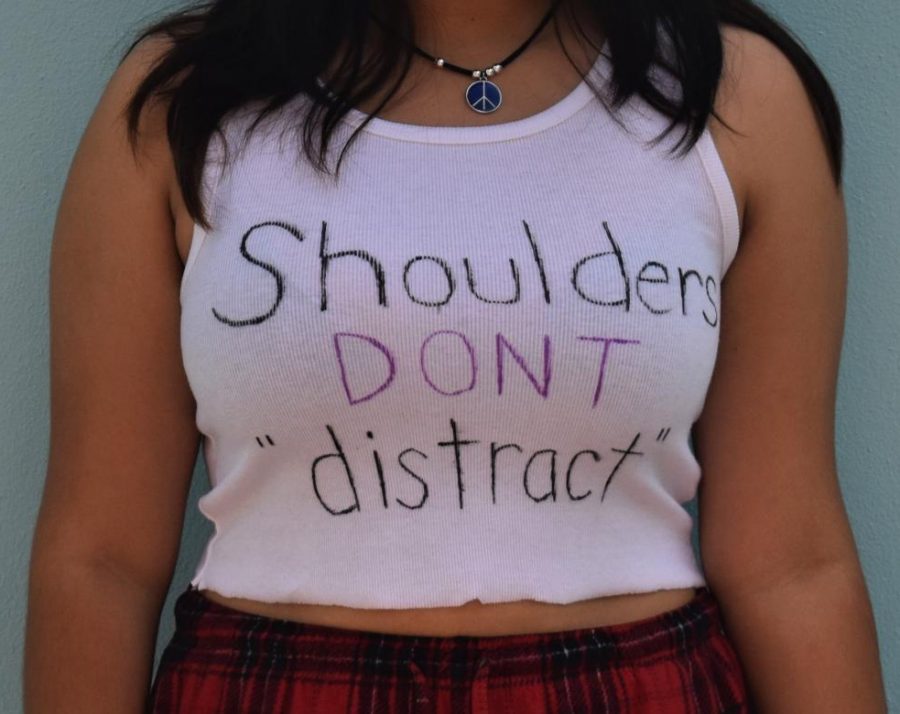 A JHS student wears a shirt on Sept. 3 with a message about dress code policies.

Jupiter High students have been speaking out about the school’s dress code since the beginning of September.

They are opposing certain policies, like no rips in jeans above the knees or no spaghetti straps, by putting up flyers in school restrooms, posting on social media and wearing shirts with sayings about the dress code. According to the students, they feel the dress code is biased and tends to punish more females than males.

“It’s unfair how we can’t wear tank tops around the school when it’s 90 degrees outside,” Melanie Lizama, senior, said.

Boys at Jupiter High also have an opinion about the dress code issue.

“I believe clothing is a form of expression, and that no one should have to feel as though their expressions are inherently wrong,” Kohl Hobbs, a JHS senior, said.

“Students want the freedom to dress in a way they want to express themselves, which I can see, but I feel like there’s a time and place for it,” Foss said.

Similarly, Susan Diaz, a JHS assistant principal, believes you should also dress according to the environment you are in.

“It’s not about distraction; it’s about policy. You should dress for success. At the beach, you can wear whatever you want. In church, you can wear anything, but you shouldn’t wear a bathing suit,” Diaz said.

Some students are not able to follow the dress code for medical, or other personal, reasons.

Lauren Belt is a senior at JHS. In May, she got surgery along her spine that prevents her from wearing shirts that cover the bottom of her scar.

“In the first two weeks of school I got dress-coded 12 times, and every time I had to explain. They told me that until I get a doctor’s note they would still dress-code me,” Belt said.

Because of her surgery, Belt has issues opening doors. One time, she had to ask a teacher for help with the door, and the teacher pointed out that Belt’s shirt and jeans were out of dress code. She explained to the teacher she had a medical reason for her shirt, but her jeans had rips that did not comply with the dress code. As a result, she had to wait in the office until her mom brought her a new pair of pants.

“I realized how sexist it was after that. The boys in gym class can go and take their shirts off, and this is just a belly button. What is so amazing about that? This just made me want to make a change,” Belt said.

Belt started a petition on dress code on Sept. 3 and was interviewed by WPEC Channel 12 News on Sept. 15 for her efforts to raise awareness about the school’s dress code. Belt was excited about being able to reach such a large audience.

“I have over 500 signatures and counting. I’m not going to stop for anything,” Belt said.