OPINION: Should colleges judge students from their social media? 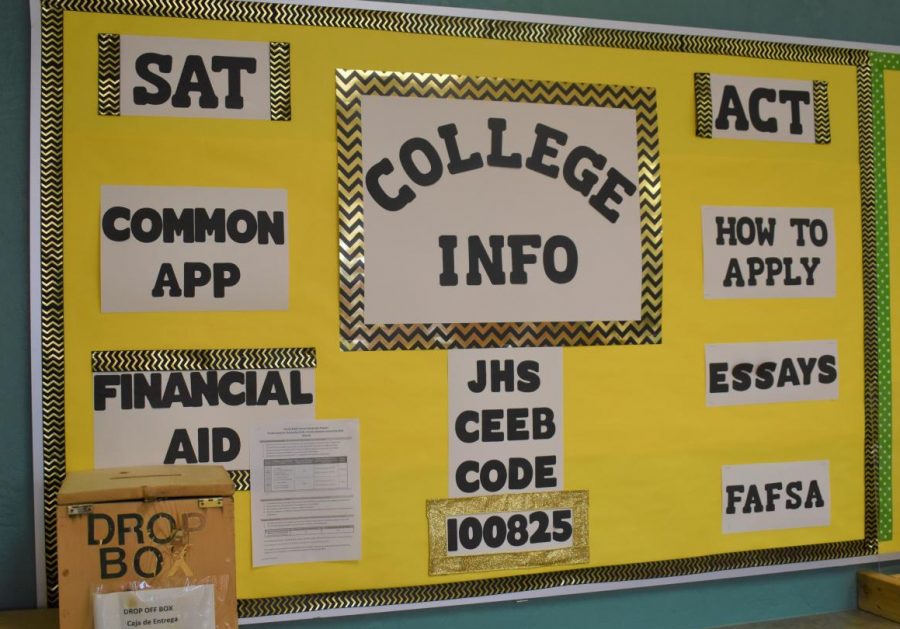 College information bulletin board in the guidance office at Jupiter High School.

With a changing society and advancing technology, large social platforms have increasingly gained prevalence and popularity among younger generations.

Although social media has opened new doors of communication, it has also opened new doors to account for people in a new light, allowing businesses, governments and universities to gain direct access to a person’s private life.

Colleges nationwide have especially utilized social media as a tool to measure applicants’ and students’ character and even in some cases denying or punishing them for their posts.

Questions have been raised, however, concerning the ethics and justifiably of these institutions who carry out these searches and their ability to hand out penalties. Is it an infringement on the first amendment and the right to freedom of speech? Is it an invasion of privacy that needs a warrant? The answer is no.

Before, colleges could only see what a student was like on paper with no knowledge of how they interact with their friends or their involvement with questionable, and even illegal, activities: partying and underage drinking.

As a student, I personally am constantly striving to be successful and conduct my high school experience around trying to get into a competitive university. Consequently, this has restricted me from attending specific social events or hanging around certain people in fear of just one incriminating photo or not being able to complete my responsibilities as a student athlete.

To see my fellow peers who carry out these disreputable actions and negligently post their behavior on social media frustrates me. These are the same classmates who may be chosen by my dream school over me. By social media evidently becoming another part of the process, it allows for this unseen side to be revealed, and the most dedicated students to be confirmed.

Lillian Gilbert, English department chair and AP English Language and Composition teacher, has worked with hundreds of students through the college application process, and finds the procedure sound and justified depending on the case.

“Academic dishonesty and bullying should not be tolerated,” Gilbert said.

Gilbert, though she does believe in colleges penalizing because of a post’s public status, acknowledged the students’ duty to go against rulings they deem unfair. However, she believes this is an accurate way to get the bigger picture of what a student is like outside of school.

“You really are your true self when no one is watching,” Gilbert said.

Though there is a lot of unsuitable information out on the web, there is a lot of constructive content generated as well. Cindy Ferrara, a guidance counselor at Jupiter High who specializes in college admission, has seen the rise of social media bring favorable outcomes for students.

“Social media is not a bad thing; it can be used to your advantage to get positive results,” Ferrara said.

Ferrara says that following admissions pages on these platforms and interacting with them can yield an important factor when it comes down to the final decision-making of college admissions.

“Not being mindful and reckless is where students face trouble on these sites,” Ferrara said.

Nonetheless, sometimes students who do these very steps and are conscious of their output, still end up facing the consequences. Andrew Mook, a science teacher and head baseball coach at Jupiter High, had a player who lost a large scholarship in a similar situation.

“He was tagged on a friend’s picture, not his own, doing illegal drugs, and Florida State found it,” Mook said.

Universities can see not just what you post, but what friends post as well. Even so, only if the accounts in which they were posted on were public. All private accounts on the major platforms have privacy guidelines in which protect the user’s information. Therefore, when college admissions reps google search your name, they can only go as far as what the servers allow them.

When it comes down to it, social media has become another element to applications as well as a test of character. Yet another thing for students to worry about. On the other hand though, what is there actually to stress about if you are conducting responsible and positive online activity?

Gracie Sanford, a current JHS senior, is applying to college and is facing the social media dilemma along with the rest of the process. She found the social media search to be not stressful at all and that her pages were genuine and true to her.

“I am who I am, and if they don’t want to take me for the way that I am, then I am sure I can find a college that will,” Sanford said.

In retrospect, there is no violation of privacy as colleges do not bypass settings to retrieve student data. In terms of violating the right to free speech, the cases that resulted in penalization involved harm, illegal portrayal or hate speech. None of which was protected under the first amendment.

Although there may be few instances of bias or political conflict, colleges get to see the bigger picture and full personality of applicants through social media. So if you’re foolish enough to post questionable misconduct for everyone to see, don’t get upset when you suffer the consequences.