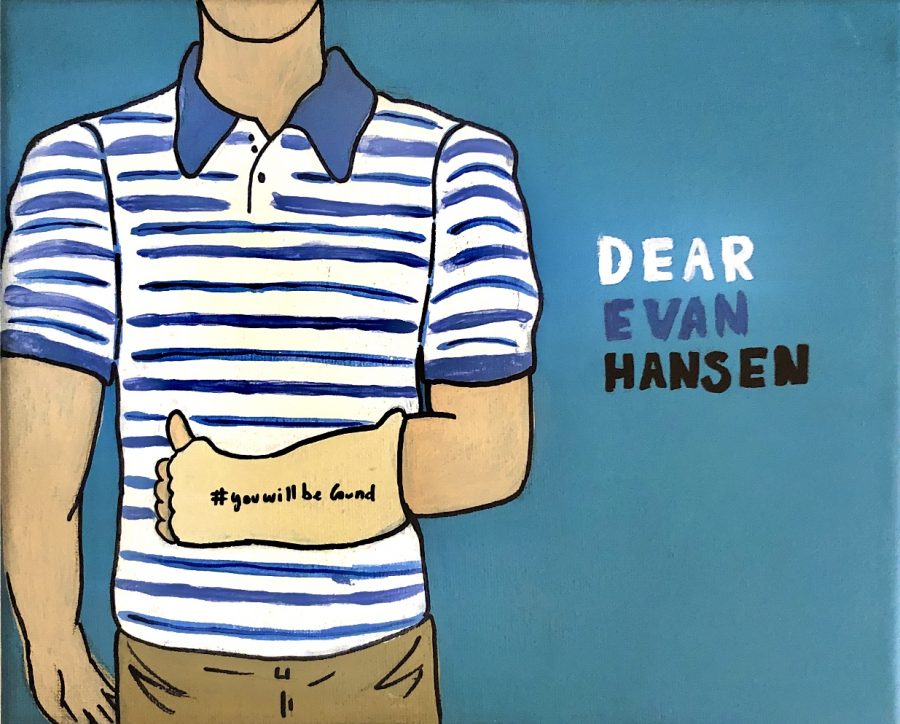 An illustration of Dear Evan Hansen

Originally a Broadway musical, “Dear Evan Hansen” was released in theaters on Sept. 24, and it received mixed reviews.

Fans of the musical say it’s a poor adaptation of the original production, and critics claim it is a harmful look at mental health issues because of the mistreatment of character Conner Murphy’s death. In truth, the movie is an overall acceptable film with a few minor and major missteps.

The film follows a high school senior, Evan Hansen, who suffers from depression and social anxiety. After a series of coincidences including his cast and misplaced letter to himself, Hansen is mistaken as the best friend of classmate Conner Murphy after Murphy’s suicide. While Hansen plans to expose the truth at first, he becomes comfortable with the misconception until the web of lies he’s built starts to crumble around him.

Though the plot is relatively simple, this movie shines through the characters and music. All of the movie’s characters face real world struggles throughout the film, and can be seen dealing with serious issues with their mental health as they deal with anxiety and grief, and I think that the movie accurately captures that.

Film critics have harshly criticized the film’s main character, claiming Hansen as completely unsympathetic and manipulative because of his deceit towards Murphy’s family. Though I do agree that after a certain point in the movie he is hard to sympathize with, the point of the film is to understand him. Hansen changes throughout the movie from reserved to manipulative to regretful. The film shows Hansen’s changes in such a natural way that the viewer will be left wondering if he really changed at all or if he was always this way.

The movie’s music is a huge highpoint for it since it mostly takes its music from the musical.

Individual songs included in “Dear Evan Hansen” are mostly unchanged from the original. What the movie does change is the number of songs present in the movie. The film excludes four of the songs from the original musical whilst adding two original songs made specifically for the movie.

The songs of “Dear Evan Hansen” mainly take a somber, but hopeful tone. It expresses this through the introspective lyrics and soft guitar that plays during the personal moments. When a given song switches from somber to hopeful, the music becomes more grand as a chorus and more instruments join in.

Each song is different enough to differentiate but are still similar in tone. However, one song is an exception to this, “Sincerely, Me.”

This song was an out of place comedy number in the original musical, even though it is arguably one of best in the musical if isolated from the rest of the story. The movie transitions to this song in a much better way than the musical and establishes one of the key characters needed for it to make sense, Jared Kalwani, beforehand well enough that the song can somewhat fit in with the rest of the story. However, the song still feels out of place in a story as serious as the one told by both the movie and musical.

Unlike other recent musical adaptations such as “In The Heights,” “Dear Evan Hansen” doesn’t use large group choreography for any of it’s songs. With the exception of “Sincerely, Me,” there are no dance routines representing the movie’s desire to be more of a traditional film than a musical.

After the movie’s trailers were released, many people complained about the visible age of Ben Platt, the actor playing Hansen. In the trailers it was concerning how old he looked because he was supposed to be playing a high schooler. However, in the film itself his age rarely looks out of place. The only time Platt’s age was noticeable was when he wore a light blue polo shirt near the beginning of the movie. The light color of the shirt mixed with his short haircut made it seem as if he was an adult dressing as a small child.

One of the main problems with the film is the relationship between Hansen and Conner Murphy’s sister Zoe Murphy. Because of Hansen’s Lies about his friendship with Connor, Zoe begins to heal from her brother’s death and they begin dating even though there was little to no connection between the characters beforehand.

The only foreshadowing leading up to their relationship is when Hansen evidently started giving Zoe more attention. Still, it is unsettling that Hansen would date someone who he is actively lying to about her dead brother, even if this was in the musical and is a significant plot point.

There were also some problems with some of the editing choices the film made.

The main problem with the editing is during some of the songs, the scene cuts to moments from the past and of the future with very little buildup, leading to confusion. Some specific examples are the respective climaxes of both “Requiem” and “Only Us.”

This is frustrating because editing choices in other songs like “You Will Be Found” and “Waving Through a Window” are not only smooth but superbly timed with the beat of the song, and it is clear that they could have done better.

However, the representation of mental health in the story is very well utilized and mental health issues have a major spotlight in the songs of the movie such as “Waving Through a Window” and “The Anonymous Ones.”

One of the songs that best highlights mental health, the theme of the production, is “You Will be Found,” which is a perfect tribute to the fact that no one is truly alone with their struggles and that there is always help available.

Grief is another well utilized theme in the film, as many main characters can be seen going through grief after Connor’s suicide. Conner’s entire family, consisting of sister Zoe, mother Cynthia Murphy and step-father Larry Murphy are the prime examples of the different types of grief, as each one copes differently.

Cynthia misses her son and desperately searches for something to remember the good in him. Larry talks about his frustration because he and his wife did all they could for Conner and yet he just threw it all away. Lastly, Zoe forces herself to only remember the trouble her brother caused in an effort to dismiss him and his death altogether.

The greatest feat this movie accomplishes is its ability to draw in the audience. Because of the filmography and framing, it is easy to feel much more a part of the story than a stage theater could accomplish. The feeling that this lie can’t last forever and everything will crash eventually follows throughout the film until the secret is finally exposed.