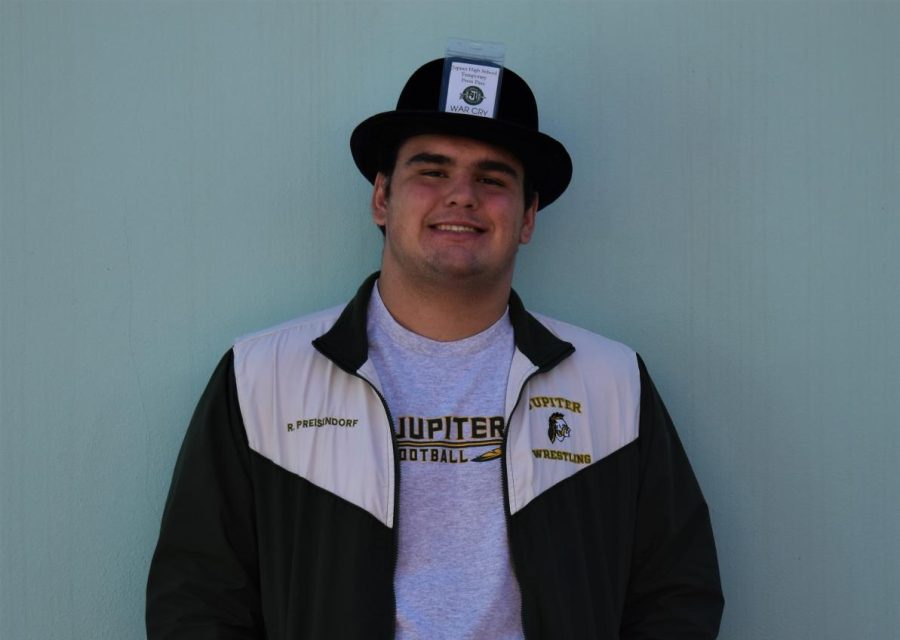 Ryan Preisendorf is recognized as Jupiter High's Athlete of the Week.

Ryan Preisendorf, senior, was honored as the athlete of the week on Jan. 5. His teachers and peers recognize him as an incredibly hard working, talented and skillful leader.

Preisendorf was nominated for his efforts on the Jupiter High varsity wrestling team, which he has been on for four years.

“My dad was a college wrestler, and was always big into wrestling. My older brother [wrestled], and I was on the [Jupiter High] team with him my freshman and sophomore year,” Preisendorf said.

As a junior, Preisendorf qualified for the state competition and placed top 12 out of 16.

“It was a very different experience. It was my first time. It was a huge, huge arena. Everyone’s there and everyone’s watching you. It’s not overwhelming, but it’s a lot and it’s a really cool experience,” said Preisendorf.

As a two-year captain of the team, Preisendorf demonstrates leadership skills to set a good example for his peers.

“We have a big wrestling team this year. A lot of them are [underclassmen], so although I didn’t look up to anyone, a lot of [the younger wrestlers] do. If you’re a leader, or captain, you have to make sure you’re doing everything right,” Preisendorf said.

Some of the other varsity wrestlers showed praise for Preisendorf.

“[Wrestling] is where [Preisendorf] really takes the team leadership since he is one of the three seniors on the team. He really teaches the young guys and encourages them to better themselves so we can better the team,” Cash Ciliento, sophomore wrestler, said.

Others recognized Preisendorf’s natural ability to help his teammates succeed.

Prior to the winter season, Preisendorf was on the varsity football team as a left tackle and was selected to play in the Palm Beach County All Star Game on Dec. 18.

“It’s nice to be recognized, especially as linemen don’t always get much recognition. But it’s nice that the county is saying ‘this guy is good’,” Preisendorf said.

“This year he’s turned into a huge leader. Not only was he doing his job, but he was grooming the younger players to be able to do their jobs,” Billy Bates, senior, said. “It’s just awesome that he’s able to use his expertise to help other kids grow.”

“He really is a team player on and off the field, and a great friend. He always makes sure to look out for the younger guys [on the wrestling team],” Ciliento said.

Preisendorf’s talents go beyond his athleticism. Unknown to most people, Preisendorf also composes music, which he has been doing since seventh grade.

“I got into a certain type of music structure called a suite because you can use it to combine a lot of different music styles,” Preisendorf said.

Preisendorf explained his current project he is working on which is a seven song orchestral suite called “The World.”

“I made a song for each continent starting with Africa and ending with Antarctica. I did a ton of research on different types of music on each and every continent. Each song is a little longer than seven minutes long with a total time of about an hour,” Preisendorf said.

“[Preisendorf] worked hard and was always willing to help the band in whatever way he could. He played in the wind ensemble and jazz band and participated in as many musical activities as afforded to him,” Camacho said.

During his time in the Independence Middle band, Preisendorf played the trombone and worked his way to Wind Ensemble, the top band the program had to offer.

“[Preisendorf] was very energetic, athletic and musically inclined. He always had a smile and was very inquisitive about music composition,” Camacho said.

Preisendorf says that music has given him skills outside of composing.

“[Music] lets me appreciate the little things in life. It made me look to make every little thing perfect. It also made me better at problem solving. Making music without a proper music composition education requires a lot of research,” Preisendorf said. “If something doesn’t sound right you try something different. You look on google, forums, teachers, anyone who can help.”

In addition to all the extra-curriculars Preisendorf is involved in, he is in four honor societies and he has also earned the AICE diploma.

“I think people really underestimate how smart he is. It’s very humbling to know someone who’s as smart as he is and yet he doesn’t brag about it. He has a perfect GPA, perfect grades. He does struggle like every other student, but he’s a really hard worker,” Bates said.

Preisendorf’s teammate explained his energy is unmatched to any other.

“He is the most cheerful, happy, encouraging and intelligent person. He can look at a really low situation, and he’s able to make something funny. He’s able to have a good time. It’s very cool that you can go in any room and he brings this kind of energy with him,” Bates said.

Lorraine Plageman, a physics teacher at Jupiter High, highlighted Preisendorf’s resourcefulness and innovation in his work.

“He has a great attitude. He has served as a role model to his fellow students as an enthusiastic, well-behaved, hardworking individual. He manages to easily balance everything in his life including having a part time job outside of school, participating in multiple varsity sports, volunteering, and maintaining exceptional grades,” Plageman said. “Doing this while also maintaining his demanding course-load truly demonstrates his determination and dedication to his future.”

After the wrestling season ends, Preisendorf will participate in track and field. He competes in discus, shot put and javelin.