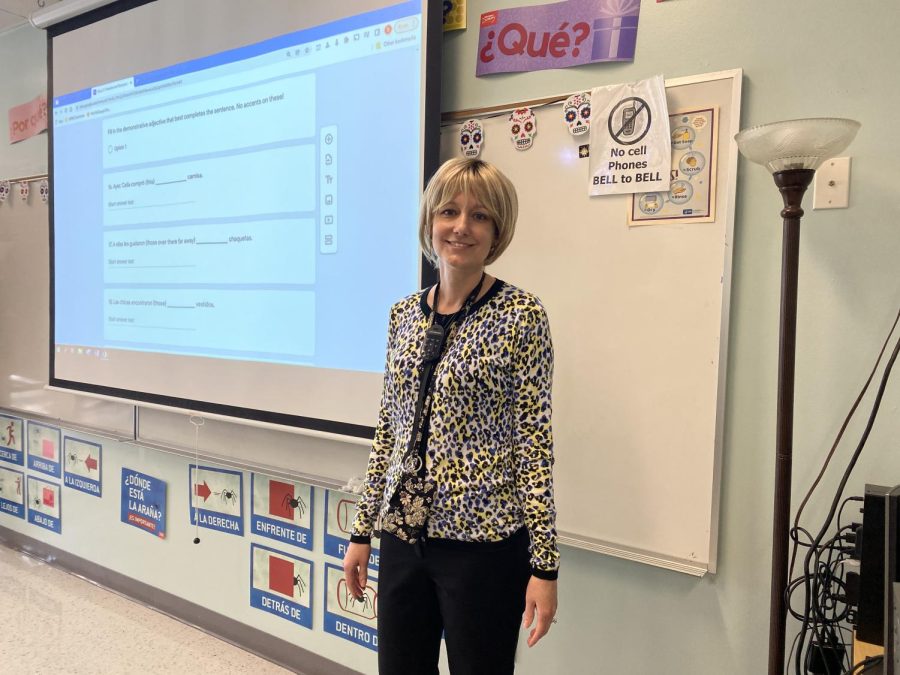 Sarah Pratico, a Spanish teacher at Jupiter High has returned to campus for the second semester after recovering from a year-long battle with breast cancer.

Pratico has been a teacher since 2003 where she taught at Palm Beach Gardens High School and has worked at Jupiter High for the past four years.

Pratico’s passion for learning Spanish comes from her high school Spanish class, where she was given the opportunity to travel as a foreign exchange student. During her travel experiences, she was most drawn to the cultural aspects of places.

“The culture, that’s what I like when we’re studying here in the classroom,” Pratico said. “I like to bring the culture into it because that’s what really brings language alive.”

Her students recognize the connection she makes with the language and culture.

“I think it is very beneficial because learning Spanish culture is significant because we get to learn about Argentina and we learn about the capitol and the food they eat,” Dylan Cava, sophomore, said. “Learning about other foods and cultures is really cool.”

“I went for a routine checkup and I was not expecting that, I was very young for it,” Pratico said.

Pratico stayed on campus for as long as possible until she took her leave of absence in April of 2021.

“While I was getting ready to have surgery, I had to go through chemotherapy and radiation, so my white blood cell counts would get very low, so I wasn’t allowed to be out,” Pratico said.

Pratico had surgery on April 2, to remove the cancerous cells.

“When it’s cancer they want to get it taken care of, you don’t want to sit and wait,” Pratico said.

Pratico sometimes attended up to four doctors’ visits a day, which felt strenuous to Pratico. Once the surgery was complete she planned to return to campus. However, there were setbacks.

“They found that one of my lymph nodes had a little bit of cancer in it, a micro metastasis, so the doctor and I decided then I would do the chemotherapy and radiation,” Pratico said.

This chemotherapy and radiation was to ensure the cancer was not spreading to any other part of the body and has strong effects.

“Basically chemotherapy just kills everything in your body, it kills the good and the bad, that’s why you have to be so careful, “ Pratico said. “It was the hardest thing physically that I’ve done.”

Pratico had four treatments of chemotherapy every three weeks.

“After the chemotherapy I was just extremely tired and there were different side effects that went with that, like nothing tasted good, you get sores all over your mouth, it was hard to want to eat, to drink, nothing had taste” Pratico said.  “Fortunately it would go away,  I’d have a couple of days and then I would have another treatment and it would start all over again.”

Pratico was happy to be finished with chemotherapy, but still had to have radiation treatments..

“Radiation is where you go in every single day and I did that for 28 treatments, so about five weeks,” Pratico said.

Practico faced additional challenges as a result of the radiation treatments.

“For me it made me really tired, so I would get my son off to school in the morning, because that was this fall, and then I’d go back to bed and I’d sleep until almost the time to go pick him back up from school because it just wore me out,” Pratico said.

After rounds of chemotherapy and radiation treatments , she was able to return to campus to teach.

“When I talked to the doctor and they said give it six months, to a year, I knew I had to have radiation in the fall and I thought this would be a good point for me to come back once the new semester starts,” Pratico said.

Her students are thrilled to have Pratico back on campus.

Pratico was excited to be back on campus to teach her students.

“It was nice to get back to routine, I think we thrive on routine and so it was nice when you can be in that, it seems more normal, it’s hard when you’re out of your normal,” Pratico said.

Pratico is also excited to feel like herself again.

“I looked dramatically different, and that’s really hard, so I think just feeling like myself, looking like myself again was important,” Pratico said.

Pratico is doing very well and she has been intensely exercising as recommended by her doctors.

“I’m getting better, I run about nine miles a week,” Pratico said.

Despite how challenging this past year has been for Pratico, she is still able to look at the positives.

“I got a lot of support and a lot of love from my family and from the community, so that was nice,” Pratico said.

Jupiter High students and staff are excited to see Pratico back at Jupiter High.

“Mrs. Pratico is amazing, she is a very good Spanish teacher, we are glad to have her back,” Cava said.