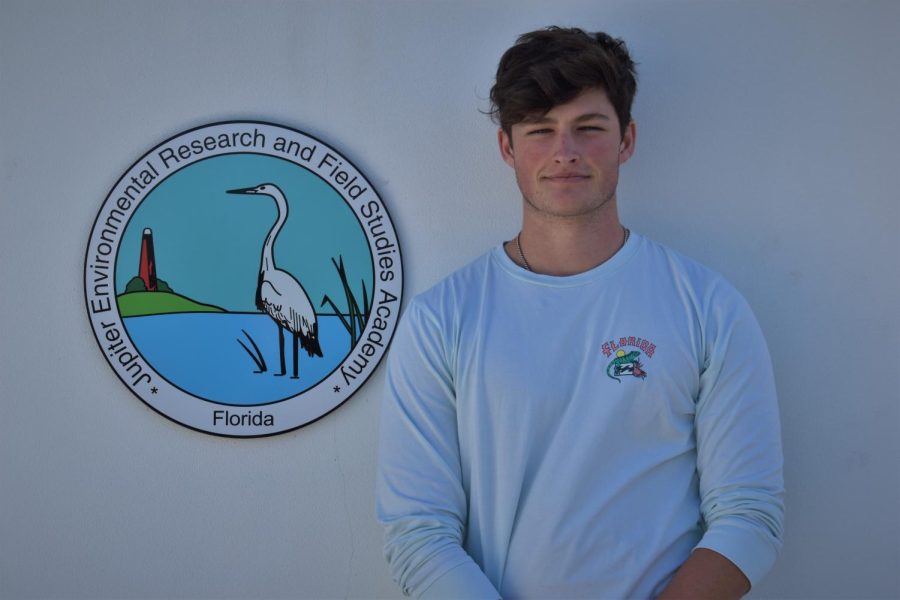 Blaine Baxter, a senior, is the 2022 Jupiter High Community Involvement Pathfinder nominee. Baxter’s community involvement is exemplified through his work with the environment. Due to his extensive work, Baxter is known as a smart, dedicated environmental activist with an outstanding personality.

Baxter has worked firsthand with the environment ever since he was a boy scout.

“The main lesson boy scouts has taught me is responsibility for your environment,” Baxter said.

Baxter has done many environmental projects during his time as a boy scout, one of which being his work at the local Tanah Keeta boy scout reservation.

“There’s a lot of invasive species… so I sprayed just chemicals, and I got a grant from the Native Plant Society…,” Baxter said. “…I go out there and I just spray a lot of the invasive [plants]. We’ve done a pretty good job of controlling the population.”

One of Baxter’s focuses is saving endangered species such as the Florida Dancing Lady, an orchid that grows solely in Jupiter and Tequesta.

“I went out [to Tequesta] and I planted 100 of [the Florida Dancing Lady’s],” Baxter said.

“65% [of the flowers] have shown growth after six months,” Baxter said.

Baxter’s poem for the 2021 Ocean Awareness Contest won an Honorable Mention Award in the Poetry & Spoken Word category. The poem focused on the ongoing problem of degrading septic tanks in Jupiter Farms.

“A lot of the homes out in the farms were built in the 80s, and septic tanks degrade… and the stuff that degrades out of the septic tanks can seep into the well water,” Baxter said.

Baxter’s accomplishments don’t stop at his work with the environment. His teachers and friends praise him as a role-model student and exceptional individual.

“He goes all out for saving the plants and the animals,” Leonard said.

“When [the Jupiter High pathfinder committee] read over his application and watched his video interview we were blown away at how involved he was in the community,” Muncy said. “He has done more [for the environment] in his four years as a high school student than people do in a lifetime.”

Baxter has left a mark on not only the environment but on his peers and teachers as well. He has inspired many to make the world a better place.

“He actually reignited… what I loved about teaching. When I see a child grow through the years, with his intelligence and his career path that he’s gonna be choosing, and his enthusiasm for learning really, it helps me,” Icart said.