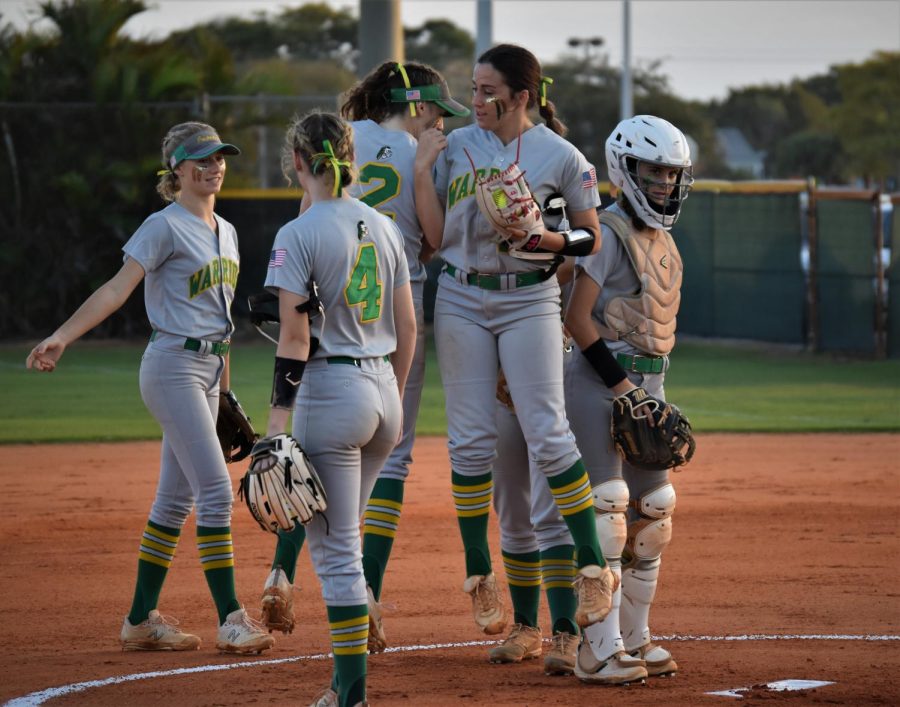 Jupiter High lady warriors moments before the first pitch of the season.

The Jupiter High softball team kicked off their season on Feb. 22 with 4-0 win over Seminole Ridge High School. Their season has continued smoothly, with a 4-1 record, dropping their only game to South Fork High School.

The girls will have their next game on March 11, and hope to improve their record to 5-1.

“My parents put me into [softball], and I just fell in love with the sport,” Emma Lucchesi, sophomore, said. “This year, I’m going to try to be a leader for the younger kids. We have a pretty young team, so I’m looking forward to being able to improve throughout the next few years.”

Lucchesi attributes lots of the team’s success to their coach, Steve Ahern, who has been coaching for 45 years in both N.J. and Fla.

“My favorite part of coaching is being a part of high school student-athletes becoming young adults, challenging themselves both on and off the playing field,” Ahern said.

One aspect of being a team off the field is team bonding, which the softball team does frequently.

“We have to act like a team to play like a team,” Amanda Pagnanelli, freshman, said. “We are definitely all friends, which I think goes into the game. We go out to dinners, hang out at the beach and do a lot of team bonding activities.”

Without each player pulling their own weight, the team cannot execute to their highest level.

“This team is showing a true passion for playing the game together,” Ahern said. “They support one another and get excited for each other when someone steps up and makes that special play or handles a crucial at bat during the game.”

There is only one senior and four juniors on the team, and with such a young roster, the girls will be working for the future.

“I think Park Vista will be our biggest competitor this year,” Lucchesi said. “But we need to work together and all have the same goal.”

According to Pagnanelli, it is her goal to do her part and contribute to the team in order to win districts and advance as far as possible.

“Our goal at the start of each season is to become the best possible team we can achieve. You never know where that will take you until the end of the season,” Ahern said. “The girls work hard to improve their individual skills, as well as developing to be the best teammate they can be.”

With such a competitive district, the girls will continue working to be at peak performance when the district tournament comes.

“I feel blessed everyday having the opportunity to be out there coaching and challenging the young student-athletes we have out there,” Ahern said. “There are a lot of lifetime memories made throughout the season.