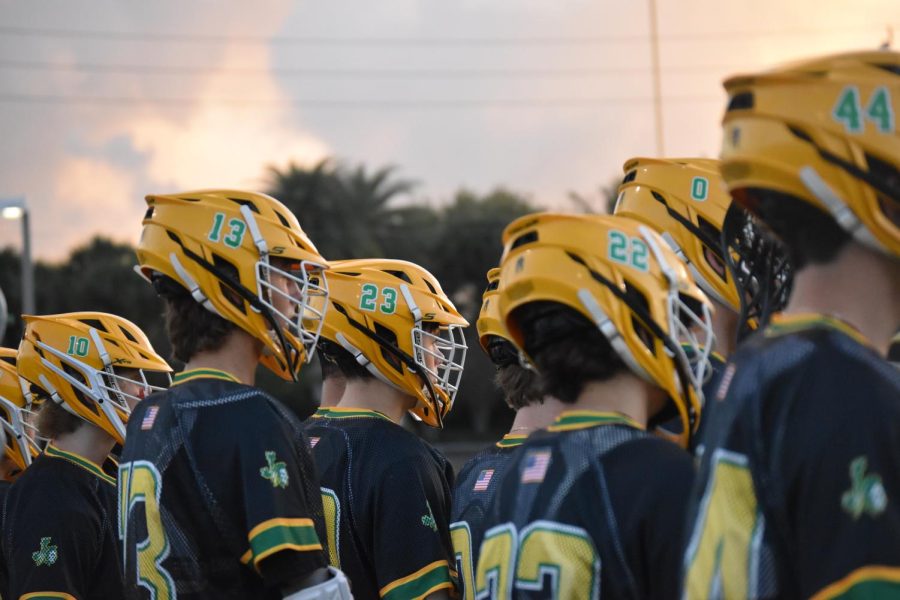 The Jupiter High boys lacrosse team will attempt to defend their 2021 state championship this year, and with a record of 9-7, they will look to put down Benjamin in their final game of the season.

“We’re just going to work hard and try to build off of last year to make another strong playoff run,” Max Silver, senior, said. “I’m in the gym a lot and I pay a lot of attention to the game, like watching film and learning about it.”

Silver believes that despite the team’s record this year, they have the potential to make it far into the playoffs.

“There’s definitely a lot of pressure defending the state championship,” Parker Jahn, junior, said. “We played a lot of tough teams this year, and every game was a battle. Our goal has been to get better throughout the season, which we have definitely already seen happening, and get ready for the playoffs.”

Teamwork is an important aspect of all sports, especially in lacrosse, where each player has to be in the right position to score or stop the opponent from scoring.

“We just really need to come together as a unit and a team, and just start playing together,” Connor O’Brien, freshman, said.

The boys have a relatively young team, with five freshmen and six sophomores, who all look to contribute to the team any way they can.

“A lot of kids stepped up from [junior varsity] this year,” Jahn said. “The team chemistry wasn’t the strongest at the beginning of the season but it has definitely gotten better throughout it.”

In addition to training and practicing together, the lacrosse team participates in team bonding events like going out to dinner after a game.

According to Jahn, the team had numerous seniors on their roster in the 2021 season, so there were lots of “new faces” this year.

“I just enjoy [lacrosse]. It really just makes me have fun, and my coaches have taught me how to be a good man and how to respect others,” O’Brien said. “They have made the game so much more fun for me and my teammates.”

Being a freshman on the team, O’Brien looks up to the other players on the team for guidance.

“I always have fun being able to run around for 48 minutes every night,” Silver said. “Aside from that, lacrosse has taught me how to be coachable and to learn good life lessons outside of just sports.”

Silver is committed to Coast Guard Academy, and looks forward to continuing his career throughout college.