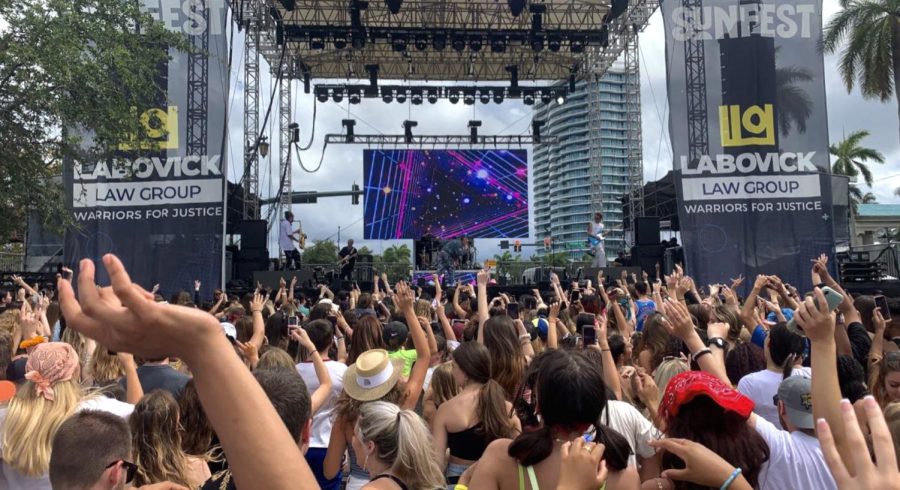 An artist performing at Sunfest in Downtown West Palm Beach

Sunfest, an annual music festival, was held from April 28 until May 1 in downtown West Palm Beach. Headlining Sam Hunt, Polo G, Lil Wayne and AJR, Sunfest featured 50 artists. In addition to the music, there were also a number of casualties this night with Jupiter High students.

“I had a great time at Sunfest and I really enjoyed Polo G,” Bella Scaramellino, sophomore, said. “He did a great job and the energy was great during his performance.”

During the second night, featuring Polo G, it rained heavily.

“It was pretty fun for the most part, we were poured on the first day we went and there weren’t many places to sit and get cover from,” Sydney Pagano, sophomore, said.

The rain got messy with the dirt field.

“My shoes were completely destroyed by the mud, it was definitely more of Rainfest than Sunfest,” Kylie Radi, sophomore, said.

On top of the rain there were a number of conflicts, from fights to stealing.

“My phone along with my debit card and driver’s license was stolen leaving me with nothing but my keys,” Mason Imse, sophomore, said.

Some students were able to retrieve their items, others were not.

“I was never able to get my stuff back even though they had caught a few of the people stealing, so I had to go buy all new stuff,” Imse said.

Landon Carr, sophomore, was one of the many who got their phone stolen and returned to him later on. “They cut my phone right out of my bag, it really ruined the mood and I was frustrated there were people like that at the concert,” Carr said.

There were also a number of fights which took place.

“I was dragged out of a fight because it was happening right next to me and I could’ve gotten hurt,” Kylie Radi, sophomore  said. “The men fighting had to get broken up by the police and were forced to leave the event.”