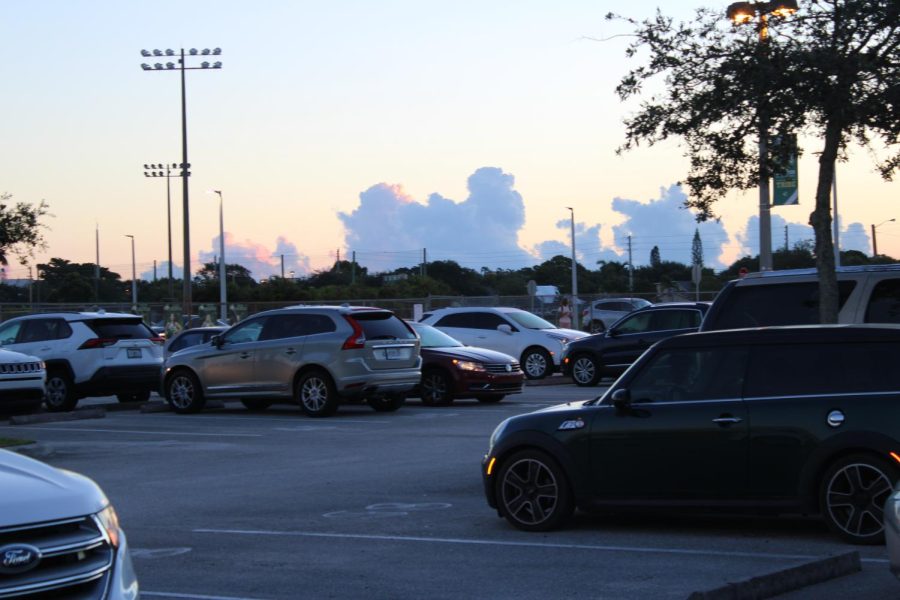 Jupiter High students are having difficulties in the student parking lots from car accidents to carline debacles.

With over 3,000 students and almost half driving to school, the carline in the morning and afternoons gets hectic.

“The parking lot is so congested,” Sloan Vulgaris, junior, said.

There is no doubt Jupiter High’s overcrowding issues extend to the parking lot, students have to plan accordingly in the morning and leave early because after five tardies, detentions and probations of parking passes will be initiated.

“I typically arrive at around 6:55, in order to get my spot situated because I would rather not have to deal with that rush hour period,” Kailey Clugston, junior, said.

The school made an addition to the parking lot in 2020 adjacent to the baseball fields in order to accommodate the student population; Vulgaris is in this new lot and sees issues with the layout.

“When I’m pulling out of the school sometimes I get stuck in the left lane when I need to be on the right and it’s incredibly hard to get to my parking spot because no one will let me in,” Vulgaris said.

These new, inexperienced drivers attempt to pull into crowded lots and tight spots, which has led to a number of accidents on campus. Ginger Gilbert, junior, was one of those students who was involved with an accident.

“It was the second week of school and basically what happened was I was swinging in and was a little too wide, so the right side of my car hit the left back of his car,” Gilbert said.

A similar situation happened to Emily Maki, junior, in the morning.

“We watched this girl go into her parking spot and she completely hit my car,” Maki said.

Following these events, the students got a hold of the school police officer, Officer O’Sullivan, in order to find the right plan of action.

“Parents can make the decision to pay x amount of dollars to get the car fixed, or to go through insurance which will make your insurance go up a crazy amount,” O’Sullivan said.

Officers don’t deal with accidents under $500 and any accident which takes place must be reported right away.

“What I find is young drivers are just making honest mistakes where they are backing out of a spot and not looking, or maybe there is a blind spot, or they are pulling in and don’t estimate the proper distance when pulling in, or they pull in very close to the line,” O’Sullivan said.

Ava Miller, junior, got into an accident due to not paying attention to the road while waving to a fellow classmate. Miller has advice for those new drivers.

“I would just say put your phone down, focus and be patient,” Miller said.