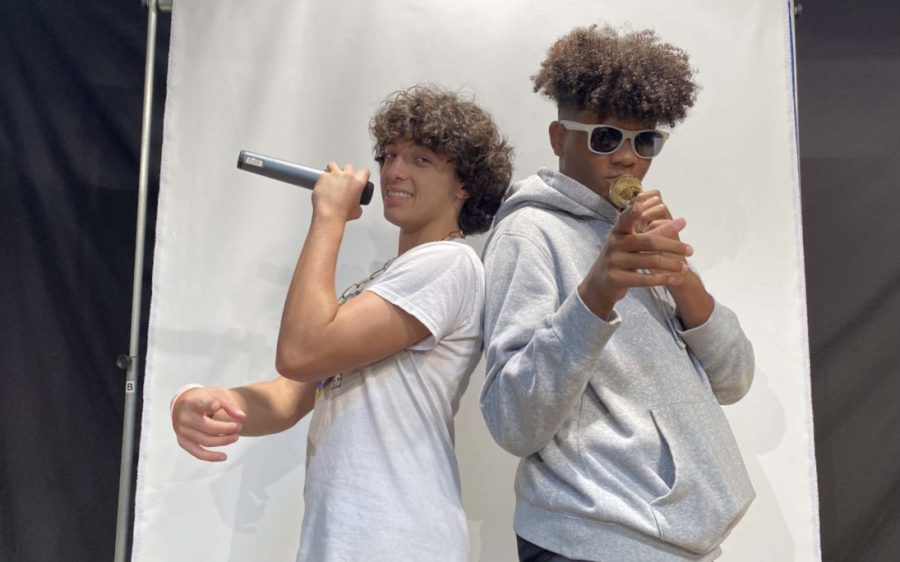 Seniors who have only known Dobuler, former student and news anchor, are already enjoying the news.

“It’s a little sad that our king Dobuler has graduated, but I do like our new anchors and they seem to have really good chemistry,” Lillian McGrath, athletic coordinator of SGA and president of One Tribe, said.

Runner thinks he is up to the task of filling Dobuler’s shoes.

“I don’t feel there was any intimidation, but rather nervousness as filling the place of Jason Dobuler is definitely a hard task. However, I feel I have been doing a sufficient job so far and there is always room for improvement,” Runner said.

Collum and Runner are prepared for the task of taking on the student news. Being loved by students and teachers has proved to be advantageous for them.

“They have a broad friend group, and are outgoing people so it is easy for them to reach out to a wide community from freshman to seniors,” Rebecca Senecal, AICE Travel and Tourism teacher, said.

“They seem to enjoy interacting with students, are good at public speaking skills and they’re spunky,” McGrath said.

Collum and Runner are determined to interact with a broader audience than years past.

“I want to make [the news] very interactive with students, my main goal is to get as many people as possible on the news and not just have it be me and Ray Ray,” Runner said. “I think everybody in the school should be connected and the news is a way that everyone can be involved.”

“We want people to watch it and feel comfortable to interact with us in school. We don’t want to just be the news people, but we want to be able to have friendly conversations with everyone,” Collum said.

In the first two weeks of school, Collum and Runner are already adding things to reach their goal.

“Our selfie of the day is very interactive. People are already coming up to us and asking us to be a part of it. This gives everyone the chance to tell us a little bit about them,” Collum said. “Once the selfie of the day becomes a bigger thing it can create a lot of friendships between people.”

“They could have people send them videos and pictures of what they’re doing outside of school, for example, to promote someone’s club or good deeds,” Senecal said.

“I want to make skits on the news because I feel that skits grab people’s attention and make the watchers more interested in the rest of the news,” Collum said.

Mcgrath agrees on the engagement that skits would provide for the news.

“I think little bits are funny to add, I love when there’s random skits it makes everything fun to watch,” McGrath said.

While Collum and Runner have incorporated a number of new ideas into the announcements, they have received guidance from previous anchors.

“We get a lot of help from behind the scenes. Kierstyn Fisher, the news anchor from last year, has given us a number of tips just to help us and get comfortable,” Collum said.

The duo is eager to bring news ideas to the news.

“I like the aspect of it being something different. Not a lot of people get to do something as big of an opportunity as I got,” Runner said.